This article is about the introduction of the latest Renga release 4.9, in which much attention was devoted to improving the drawing automation capabilities, as well as the implementation of pitches in pipeline and ventilation systems.

What all the designers have been waiting for has come true! The sections now can be adjusted in terms of depth of visibility. But this is only part of the new functionality. The sections have also got boundaries. They are determined by extreme designation points of the section. Now the designer can individually determine (during model construction) whether the section will be common for the entire building or only for its fragment. The fragments will display the model objects included only within the boundaries of the sections, which will increase the system performance. There will be no need to spend resources on processing and recalculating unnecessary objects. Previously, even the elements hidden by the view boundaries were processed. This could be seen in complex and dense drawings. 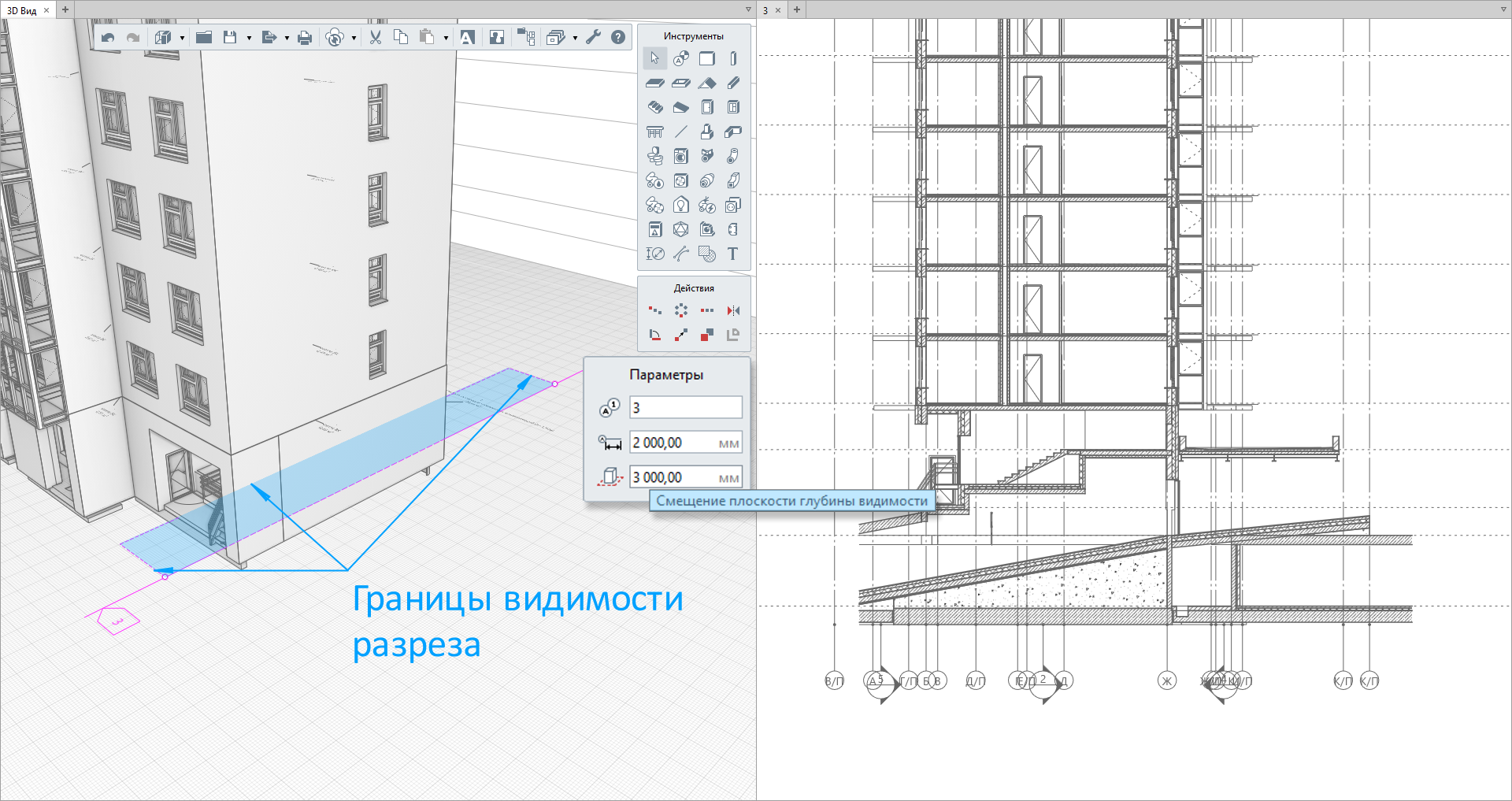 The new section parameter allows adjusting the depth of visibility, and the extreme designation points of the section define the lateral visibility boundaries.

In the previous release, based on formulas for object properties, we implemented the ability for users to automatically get specifications of reinforcing elements when laying reinforcement by separate bars. With the help of the new release, designers will also be able to quickly get specifications for both parametric reinforcement and reinforcing units, since we have taken into account the calculated properties of these objects. 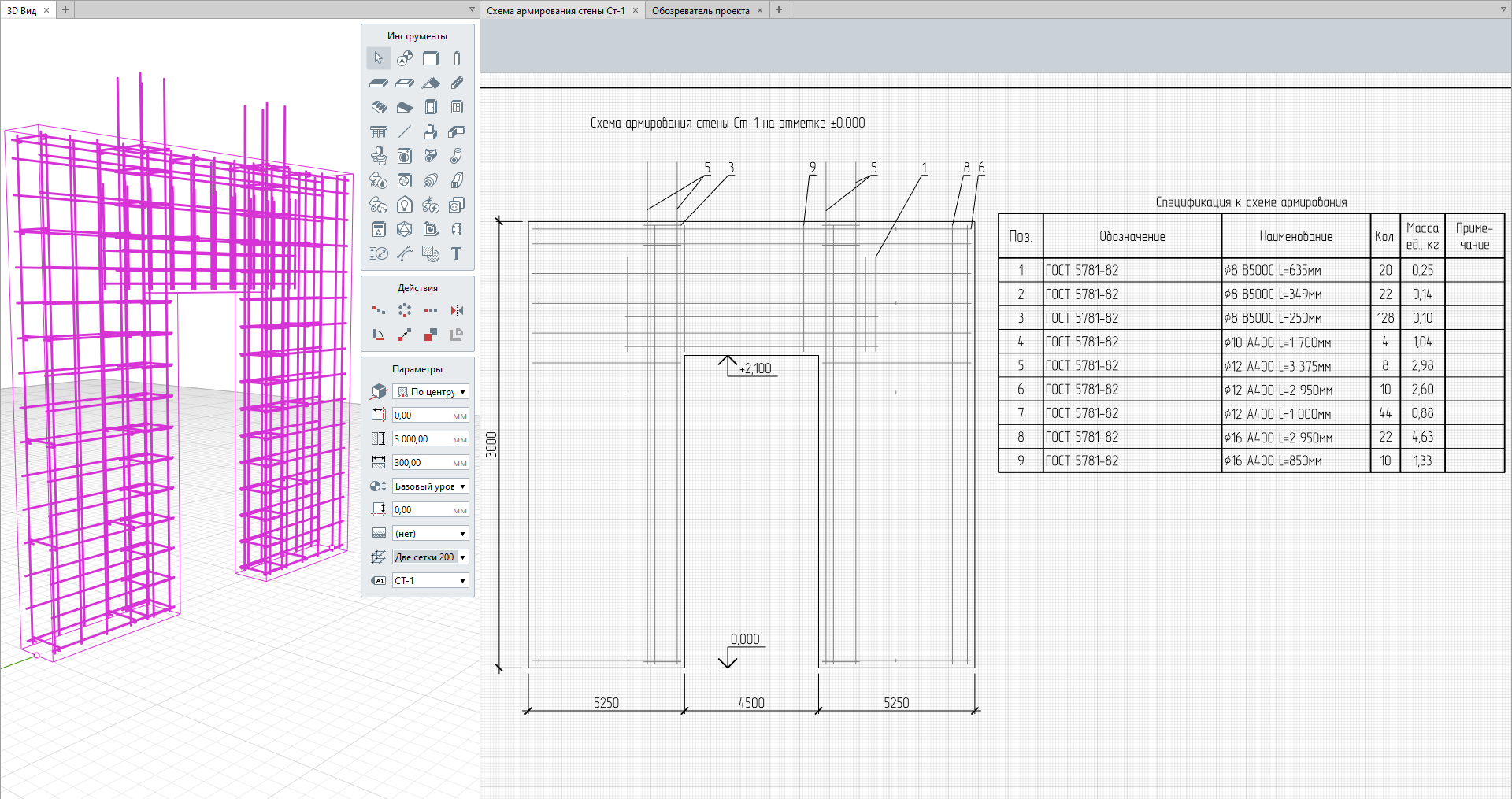 Users often expressed the desire to add the multileader to Renga for the preparation of drawings. Now, this feature has become available. As you know, the Marker tool allows to automatically retrieve model data from one object marked as a leader in a drawing view. But in practice, designers are often faced with the need to mark several objects with the same marking. For such cases, a multileader has been implemented in the new Renga release. It should be noted that the multileader feature is also implemented in Leader Label. 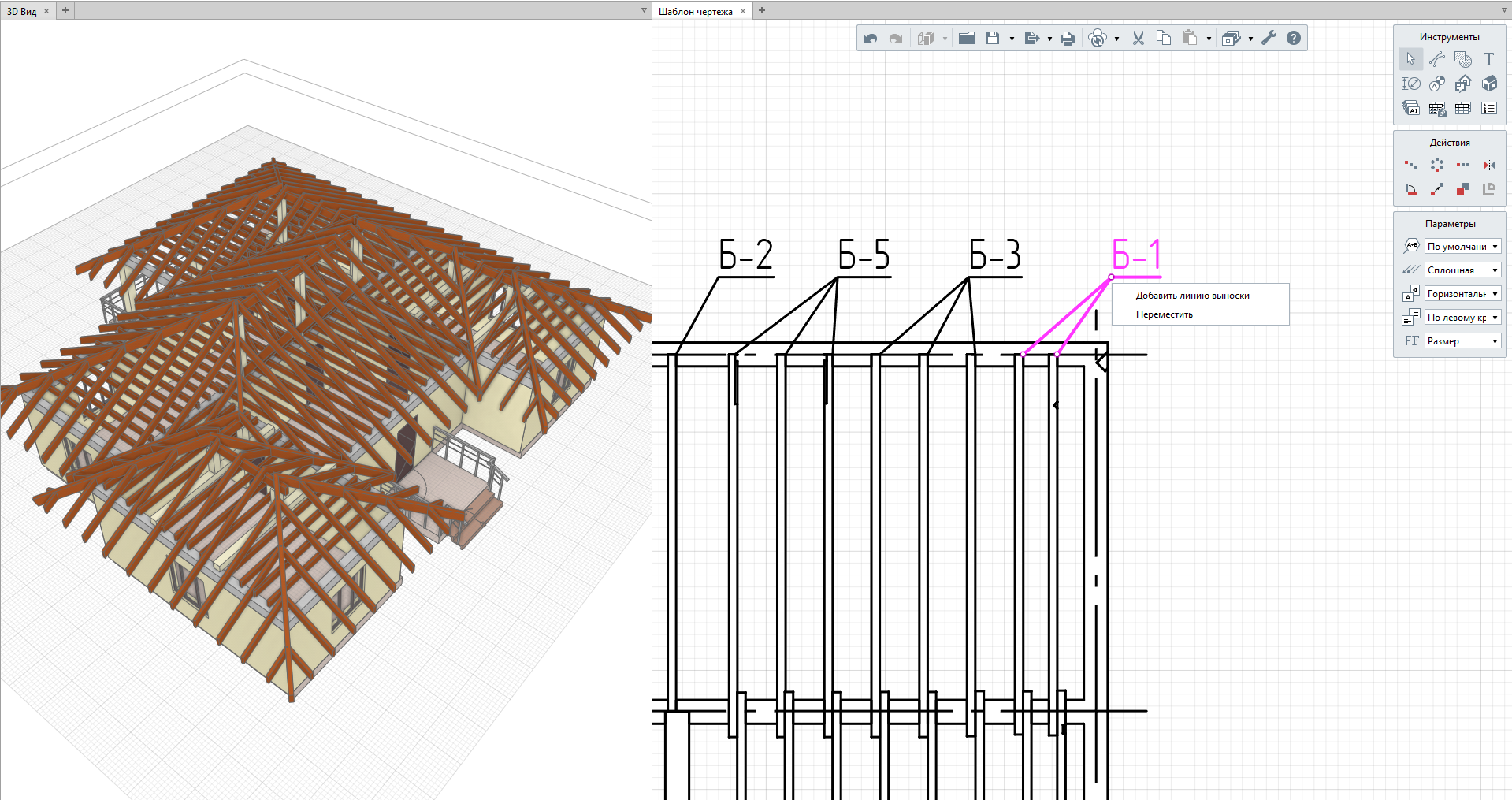 Adding a Marker leader line in the drawing.

To create a multileader in Marker and Leader Label, the "Add Leader Line" command has been added, which can be found in the context which appears upon holding the cursor over the marker.

What concerns the Marker, if several selected objects have different initially set values, the Marker will display the “multiple values” label.

And if the user needs, for example, to make a comb leader, then the new command "Add Fracture" will come in useful. 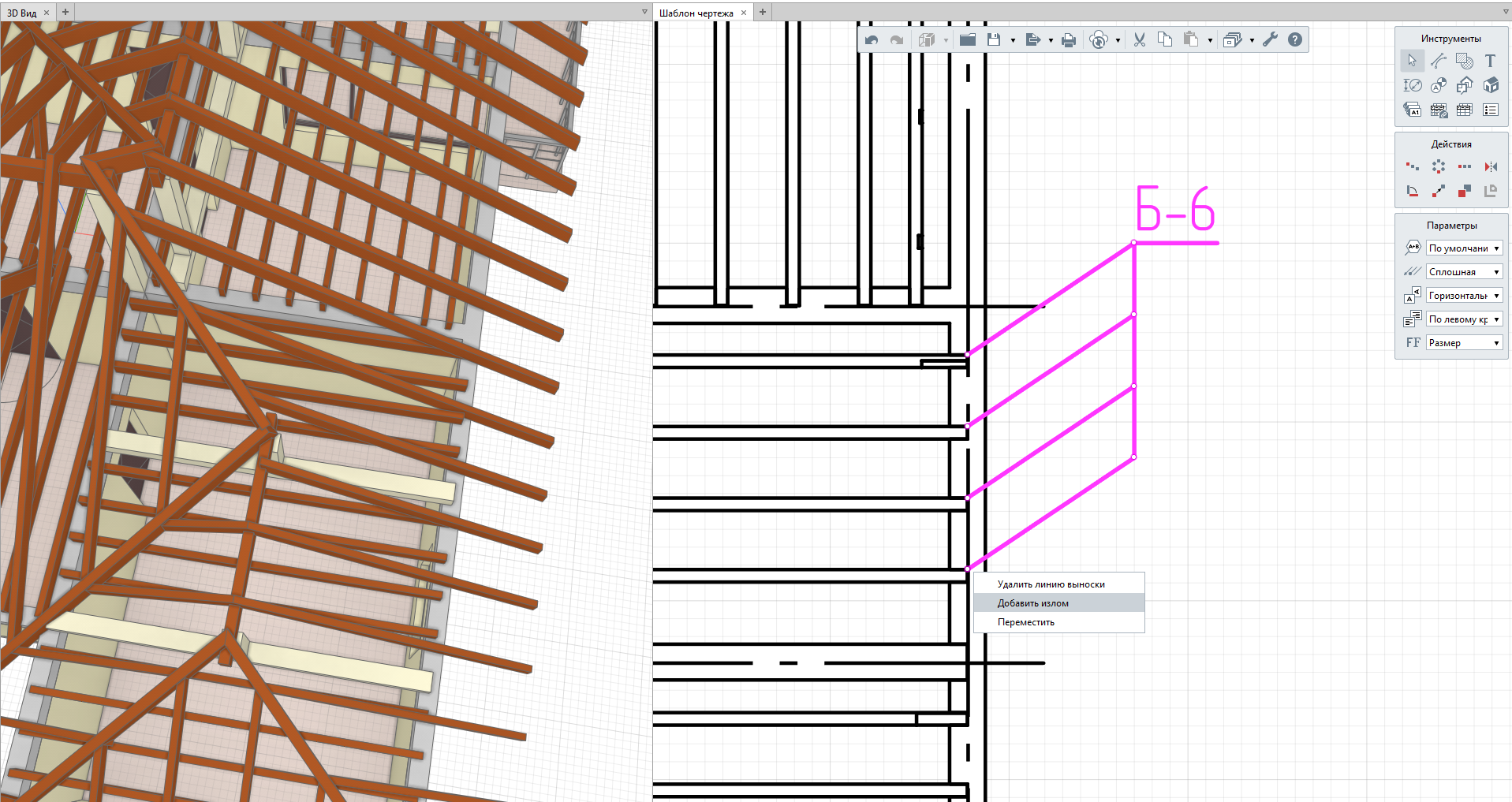 Creating a comb leader in a drawing view.

Many pipeline and ventilation systems require laying at a specific angle. This is due to the functional purpose, for example, of sewerage, and the need to maintain the systems: remove condensation or drain water to carry out repairs. Previously, the only way to set the route pitch was to adjust the elevations of trace points. Now users can take advantage of the pitch control parameter. It applies to all pipeline and ventilation systems. The mechanism allows setting up a pitch in a route section in ppm and changing the pitch direction as required by the project task. 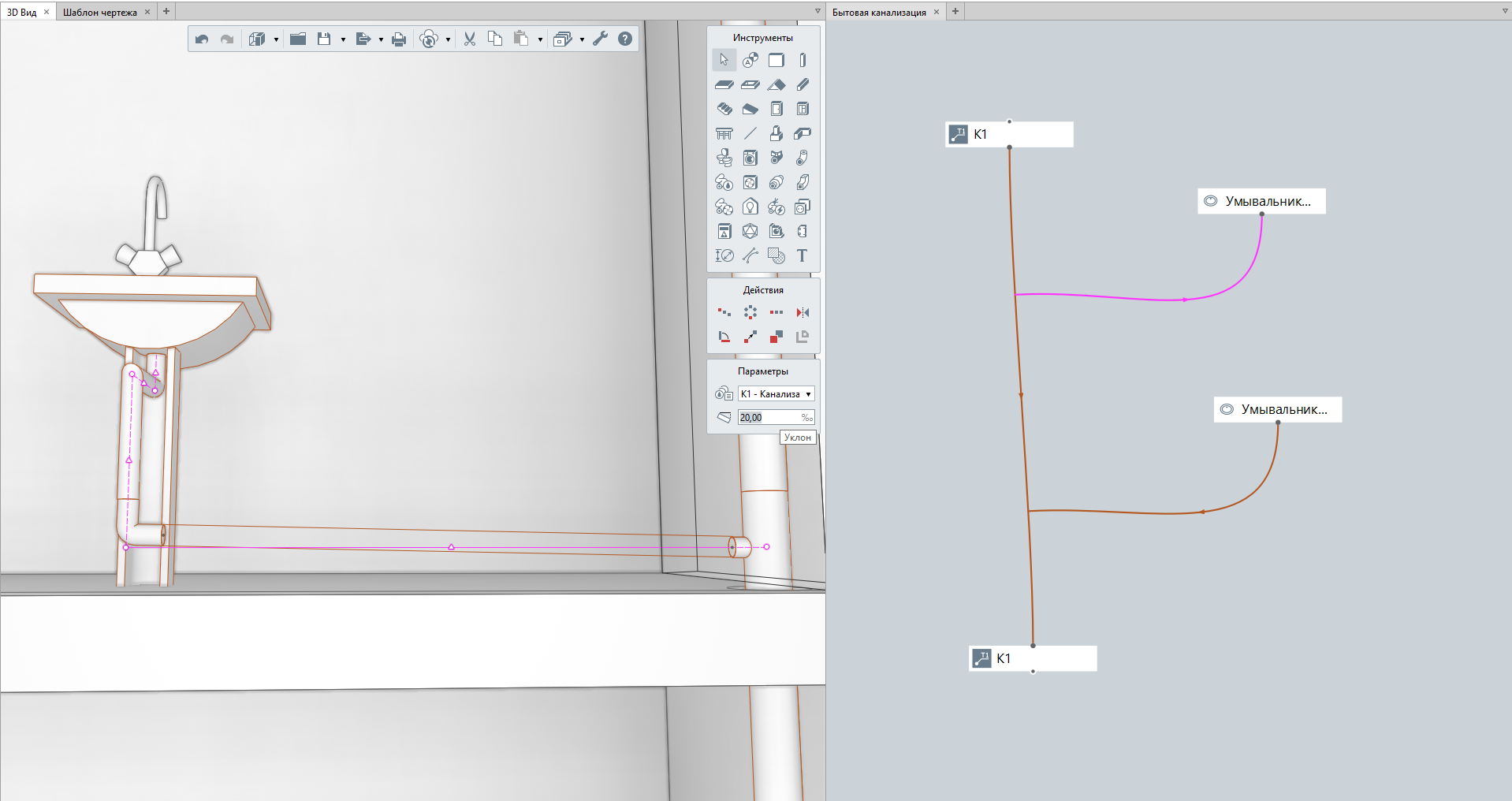 The pitch set for the sink-riser connection section when editing the route. 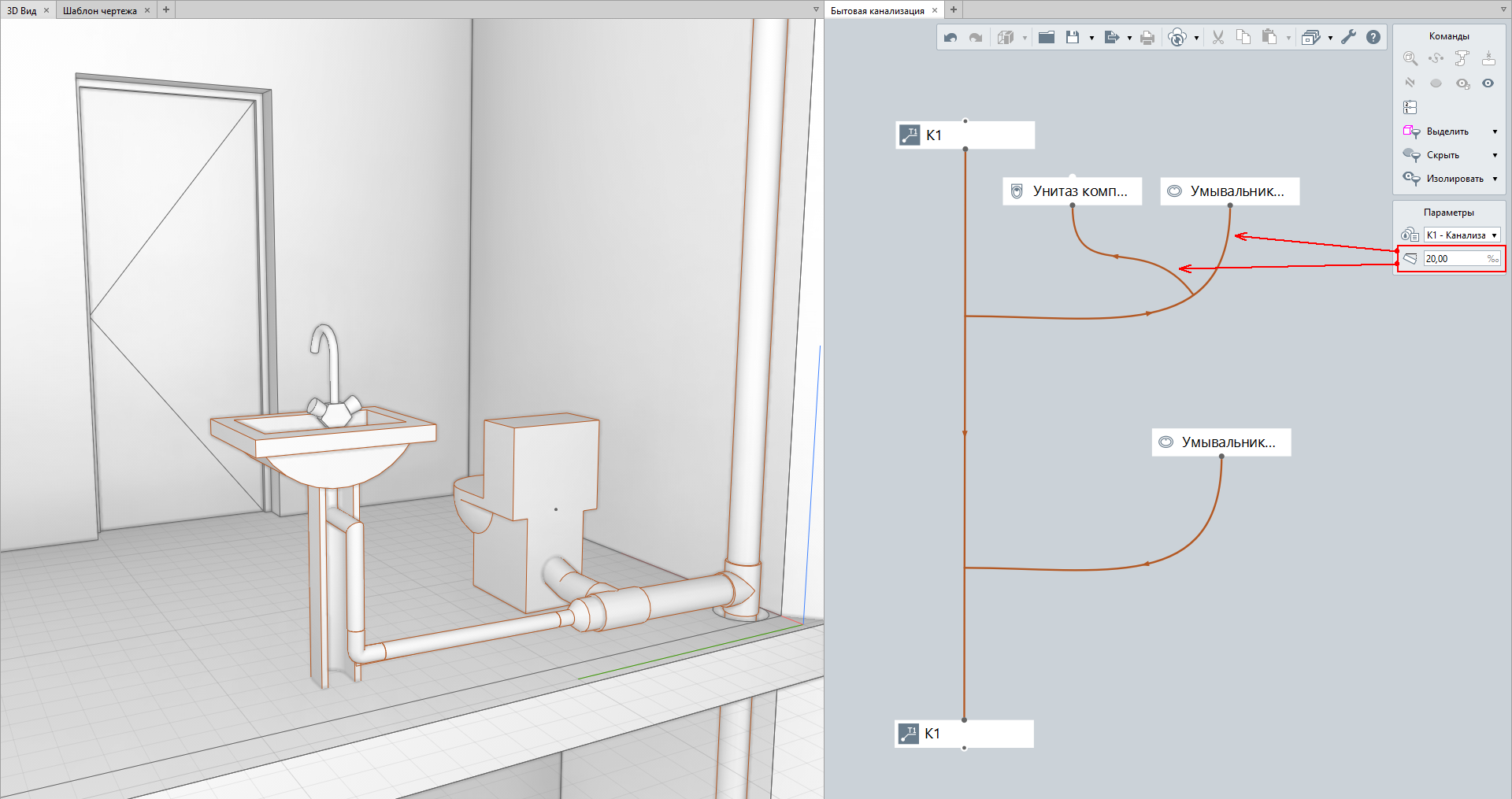 The toilet connected to the pitched route.

If you set the pitch using a new parameter, and the pipes do not change their position, pay attention to the route horizontal position. And in case the route's pitch has already been set using split-level tracing points, the pitch will not be applied. If the route is strictly horizontal above the Level and has no route points with different elevations, then the pitch will be implemented as a pipe offset relative to the route. Therefore, the engineer will never make a mistake when setting up the pitch.

It should be noted that the pitch parameter always has a positive value, which means that the pipe with a pitch will go up from the first to the second route point. If a downward pitch is required, then execute the "Flip" command. 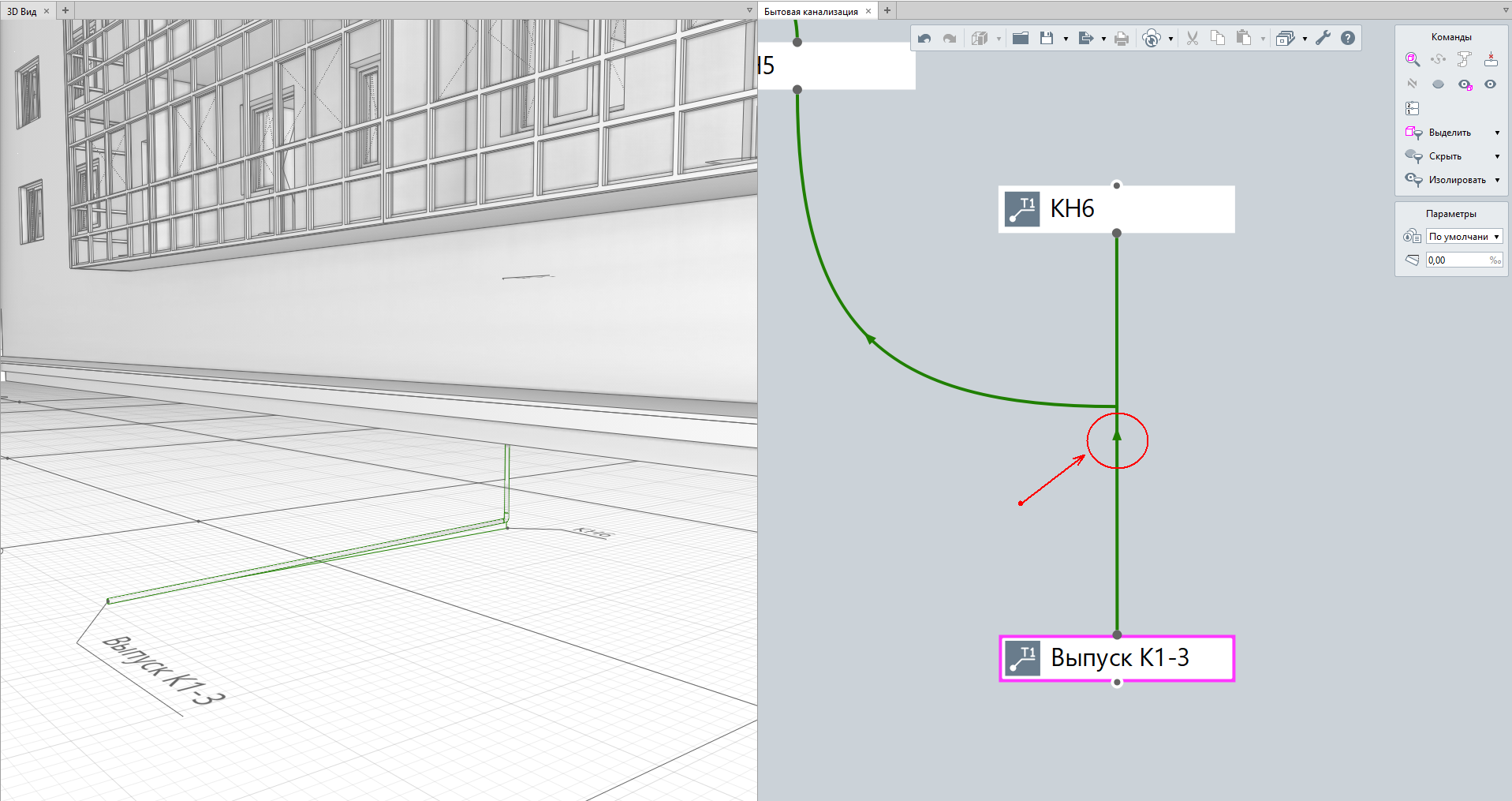 Setting the pitch at the sewerage outlet section of the building.

We continue improving the export to IFC4 format from release to release. Export with the new setting "Export geometric representation without cutting" allows designers to transfer the Renga model (via IFC format) to other programs, preserving the maximum possible number of parameters (without the history of beam ends cropping, connecting, and setting) for further editing. Many designers, who export models to other CAD programs, have been waiting for this feature.

Of course, to export the model correctly, you need to know what geometric representations the receiving side can work with and adjust the export from Renga accordingly.

The export of data to CSV format has undergone a deep conversion. Keep in mind that this format can be used to work with data in third-party spreadsheet applications (Microsoft Excel, Apache OpenOffice, etc.), creating the necessary spreadsheets, as well as performing calculations.

First of all, the amount of uploaded data (properties, parameters, and design characteristics) has expanded. Now it has become consistent with the dataset, which the designer is used to work with in Renga, for example, when creating specifications. 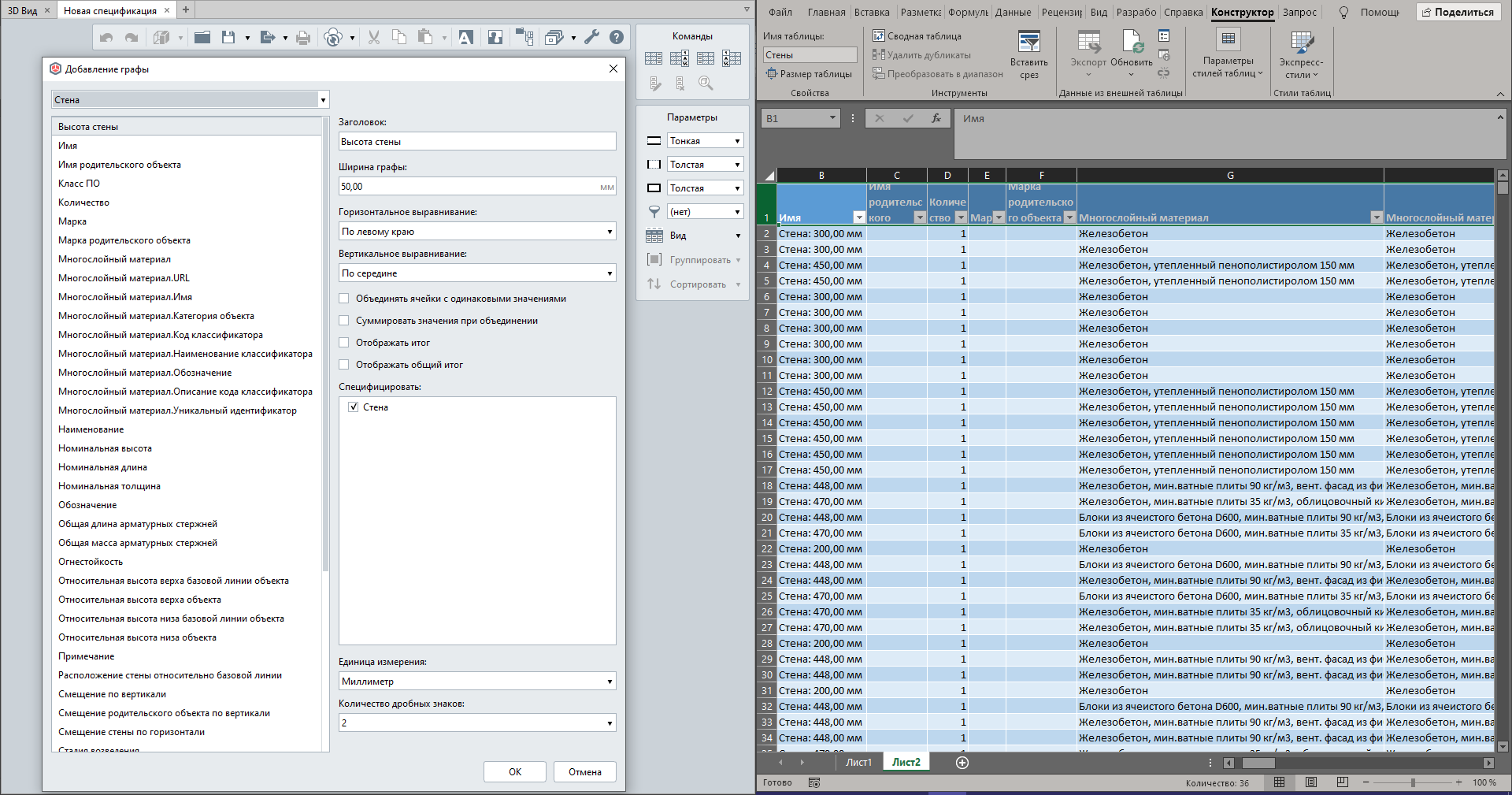 CSV reports are generated from the same dataset as specifications in Renga.

In each datasheet obtained from Renga, the links to the Project.csv file, which previously contained the names of styles, materials, levels, etc., have been removed. Now each CSV datasheet is an independent and complete set of data for each object type, which will become easier to work with.

And finally, the export to CSV now matches the Renga localization, i.e. when exporting from the English version of the program, all names of CSV datasheets and their uploaded parameters will remain in English. 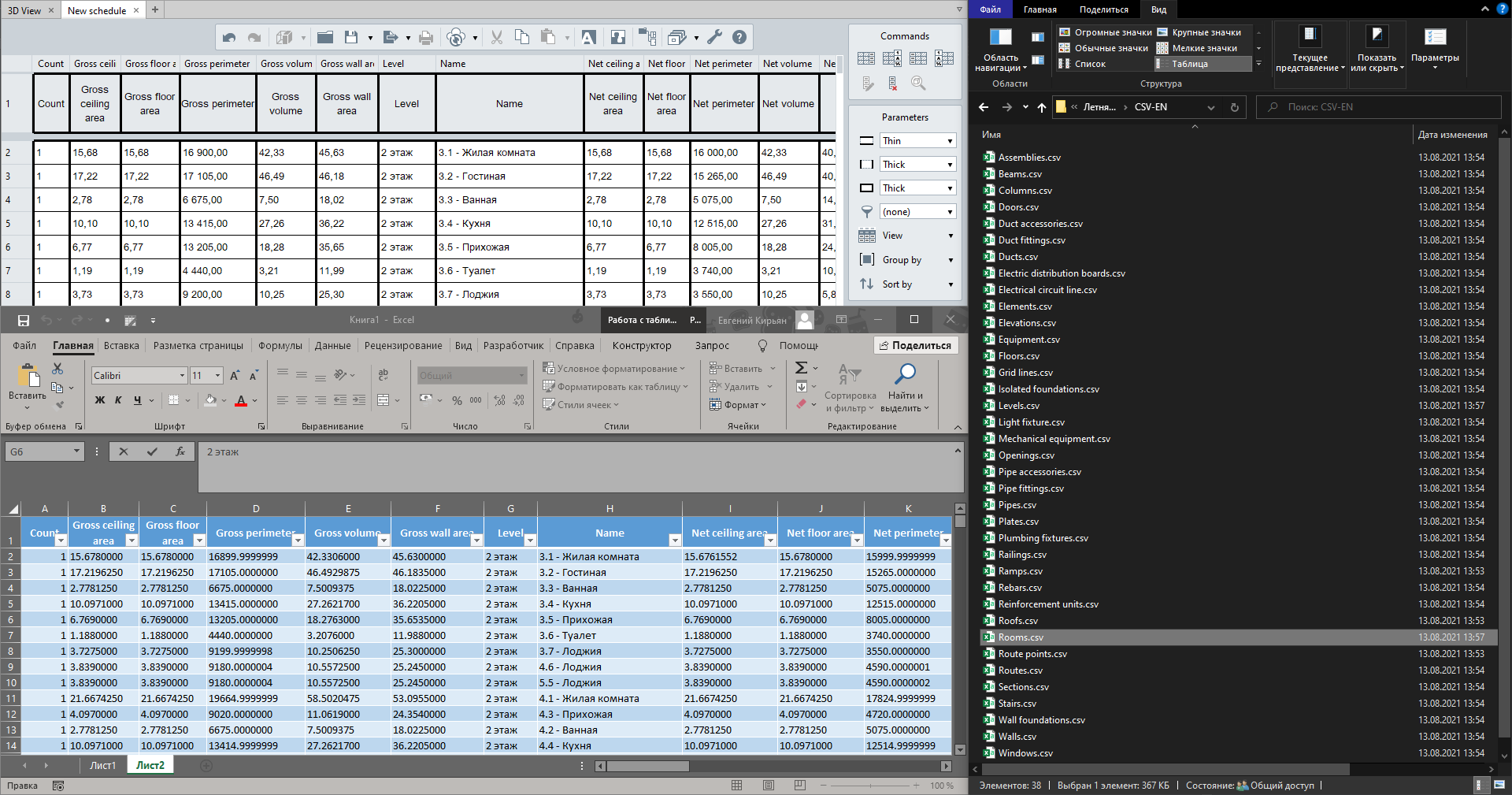 When exporting from the English version of Renga, the names of files and attributes are localized in English.

Due to the introduction of a new mechanism for receiving reports in CSV format, some templates that do not support export to CSV have been removed from the website.

With every new release, we also try to find ways to increase Renga's performance. And the latest release is no exception. Thanks to instancing curves, when working on project parts with multiple objects, users will no longer experience the slowdown when moving the cursor in those parts of the project. And thanks to memory clearing upon completion of work on large projects in Renga, the speed of closing such projects has increased by 30-40%. You will be surprised, but computer resources are also required to close and save the project correctly. Therefore, next time after closing the project, do not rush to turn off the computer. Let the application save the project.

And of course, thanks to new sections, the views will be rendered much faster, which also has a positive effect on Renga's performance.

The latest release pays attention to API as well. As part of improving the interaction of Renga with other software products that allow solving problems outside Renga's functionality, we have implemented the ability to get selected assembly objects and to control their visibility and visual style through Renga API.

Use Renga to work on your projects and share the results with us. This inspires and allows us to check our roadmap against your requests, prioritizing the functionality intended for the upcoming releases.