These days you can hardly find someone who has never heard about Building Information Modeling technology. There are a large number of BIM software products at the market, yet mostly all of them are foreign-made. Just a couple of years ago there were no domestically developed alternatives.

Producing Russian-made software for architectural and civil engineering is a highly demanding task only company with rich experience and competence in CAD software development could have approached. One such company is ASCON, leading developer and integrator of professional computer-aided design software and AEC solutions in Russia and the Commonwealth of Independent States. 28 years of successful producing CAD software solutions, constant eagerness to learn, progress and reach new milestones have motivated ASCON to establish a unit within the company engaging in architectural and civil engineering software development. This new software was called Renga.

As the project evolved, key stakeholders decided to increase the number of specialists in development and marketing teams in order to speed up the process of production and feature implementation. This requires significant financial investments. Senior management started looking for potential investor interested in developing BIM technologies in Russia. 1C Company has become such an investor. In conjunction with ASCON, two biggest Russian developers launched Renga Software Company.

To this date Renga Software has produced two IT solutions: Renga Architecture for architectural and construction design and Renga Structure for structural design of buildings and facilities. Release of Renga MEP, another BIM software solution for mechanical, electrical and plumbing engineering, is scheduled for autumn 2018. Thus, in just one year Renga will be able to present a comprehensive Architecture, Engineering and Construction collection - complete software suite of three programs with integrated BIM tools that enable user to meet any project challenge. 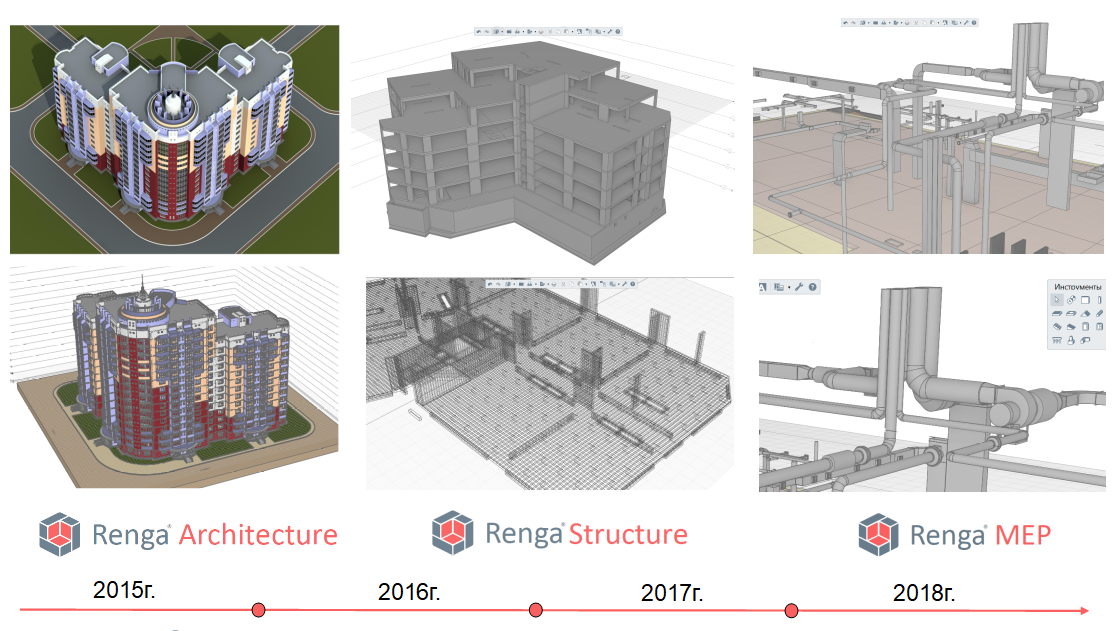 Before Renga Architecture the very first release was announced, Renga Software team had done a thorough research work that took more than 5 years. It was during this period that product team finalized the strategic vision of the product, developed the concept, validated the market and identified the needs of potential customers. Read more on this further down.

The development of computer aided design software solutions usually starts from selecting a suitable mathematical kernel. To meet this challenge product team spent some time testing other CAD products kernels. The result surprised them: turned out that the best option for developing powerful and integrated BIM system is implementing the ASCON's proprietary kernel.

The next step was to choose graphics API. And it was between DirectХ (graphics API, developed by Microsoft and designed specifically for Windows) and OpenGL (developed by Khronos Group, available on many platforms including Linux and Mac OS). Explaining this in everyday language, think of graphics API as a link between video card and software, that solves graphical tasks and provides higher performance of moving picture. After numerous tests, it was decided to choose high-performance DirectХ that turned out to be more reliable with most video cards.

The majority of BIM systems similar to Renga implemented the ribbon - user interface element created by Microsoft in the form of a set of toolbars placed on several tabs.

Renga development team has chosen a different way and designed more minimalistic, intuitive and context-based interface. Soft and unostentatious color scheme of graphite contributes to the effective and comfortable work with 3D model. Panels position, behavior and logic of the commands, all came as the result of a long, painstaking work done by Renga development team. They spent hours researching studies on user interface design and debating. An enormous amount of time and energy has been devoted to implement user interface as it was designed. 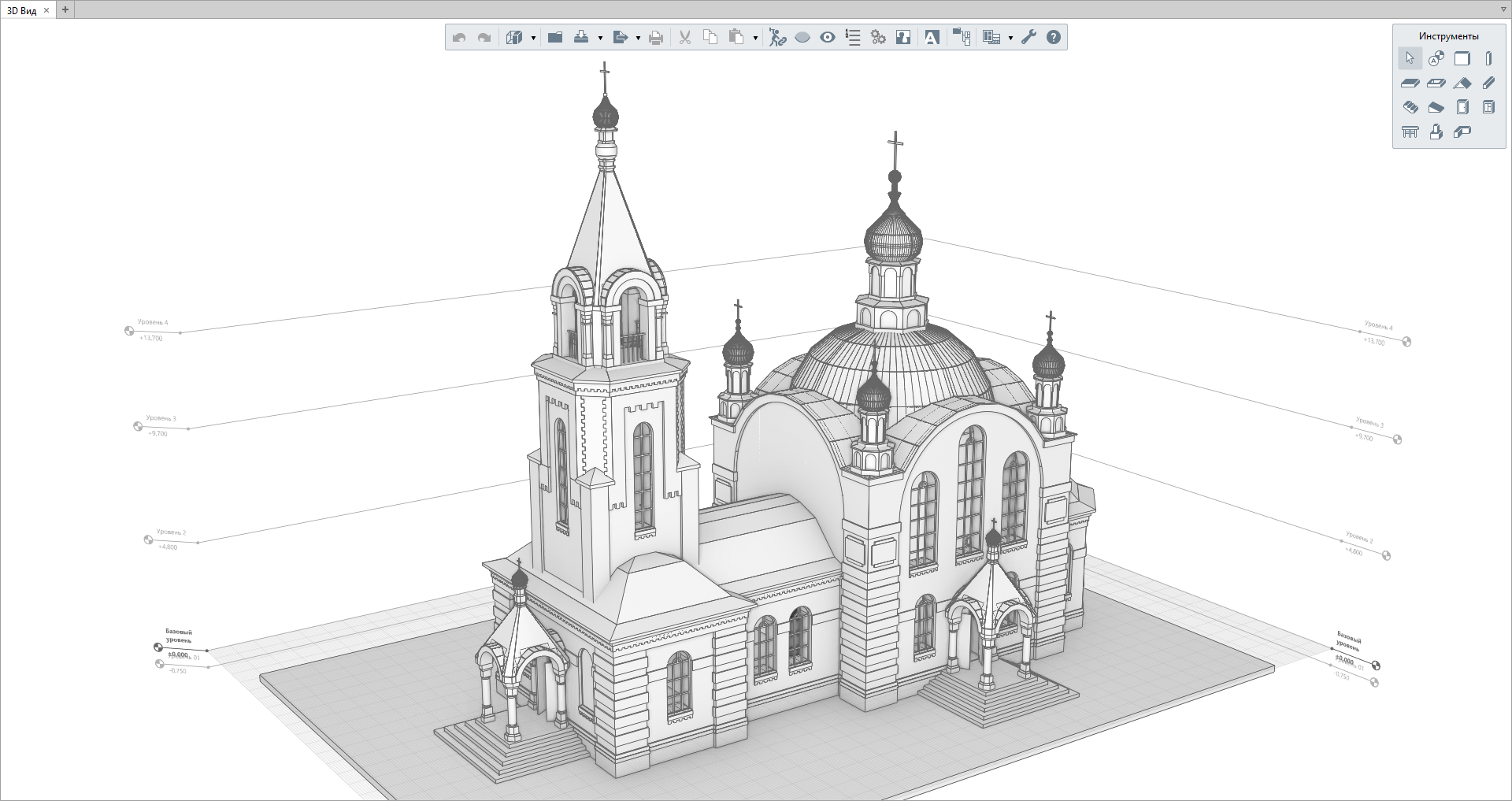 If you look at the sequence of 3D model creation implemented in foreign software, you'll see that: at first user creates required plans, after which transfers these plans to the 3D model. Sometimes it can lead to errors in the model. Of course user will note all the errors at the 3D view and be able to fix them, but what's the point of doing double work? In Renga BIM system it's the other way round: columns, walls, beams and foundation designing happens a priori in 3D view. Context-based interface, simple snap mode and conveniently arranged panels make 3D designing as easy as 2D. But user isn't bounded by one dimension: he can easily switch from 3D to 2D and keep on creating information model. 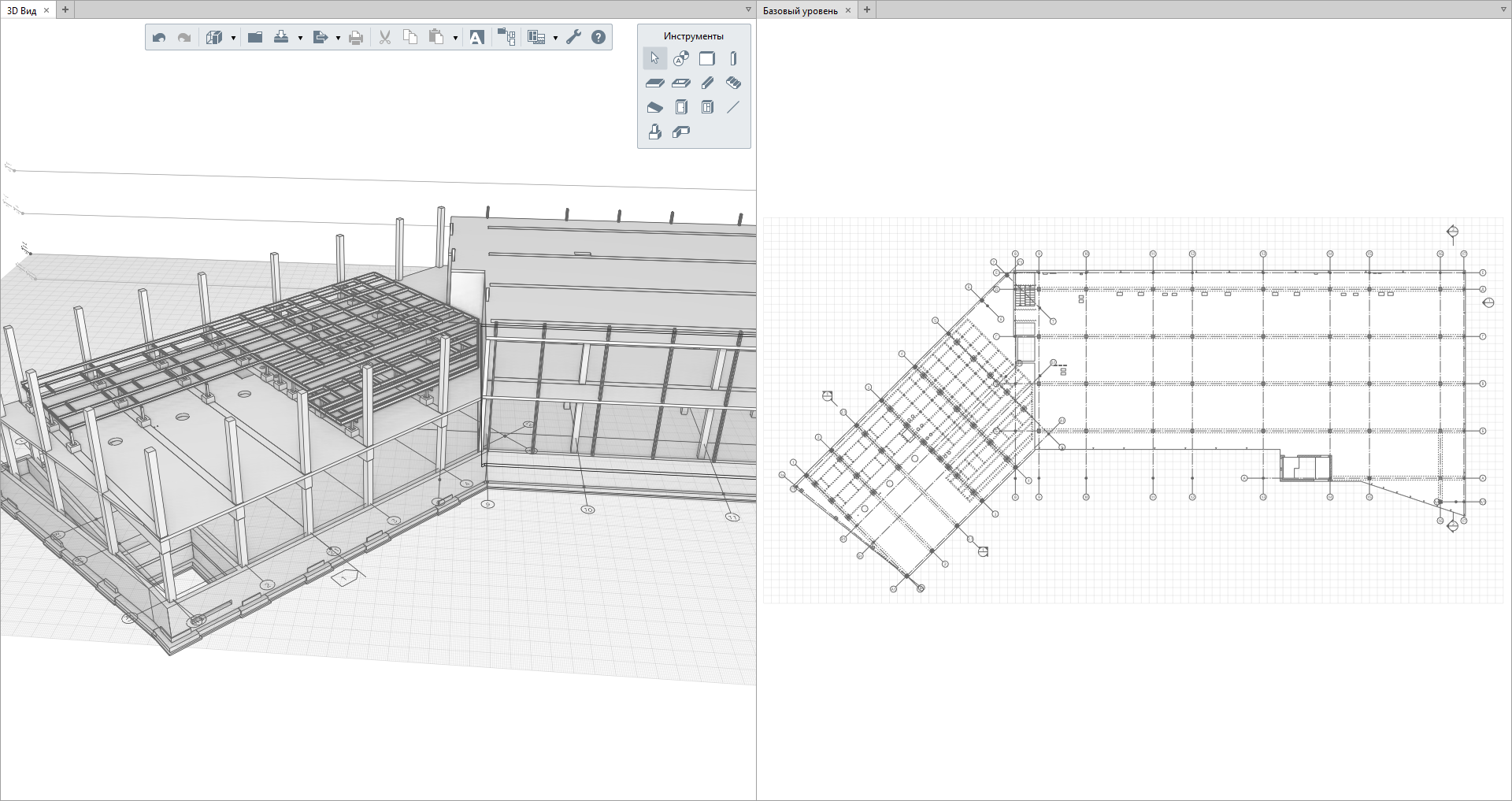 A lot of designers nowadays work with not one, but two or even three monitors. It significantly expands digital workspace, allowing to compare different documents and solve multiple tasks. As for multi-windows mode, computer-aided design software for industrial and civil construction doesn't support it. But Renga developers recognized the convenience and implemented a feature for dragging windows with views, drawings, tables and schedules to secondary monitors or dividing monitor in half as shown on the figure above. Modifying a model updates a view and vice versa. It enables user to rapidly respond and analyze all changes.

Most CAD software requires work with instance references and data libraries. Each new window, door or beam type got to have its own instance in the reference. Design companies often face a lack of required items in developer's distribution package or libraries. It raises the challenge of creating such items, which in turn requires comprehensive expertise in programming and parameterization. Not all designers obtain such an extensive knowledge and practical experience. New professions like BIM manager and BIM expert emerge. Renga product team decided to avoid implementation of instance references. This new approach increases productivity and optimization by enabling user to retrieve objects of correct configuration with less work. An empty reference is no longer a problem - software provides designers with tools needed for creating new ones.

Relevantly small file's final size is another Renga BIM system major advantage - even if you design a thirty-storey building, project file size will be a little over 1 Mbyte. It provides a way to fast copy files to external media or transfer them over the Internet. The small size comes from a text-based file format XML. Project file is a XML document containing lightweight parametric definition of objects, their positions with respect to each other and other valid information. The main benefit of XML documents is they are relatively simple to create and process, allow to create structured information and don't slow down computer performance. A model is being created from scratch when opening a file. Such operation algorithm doesn't slow down opening files. The opening takes only a few seconds, depending on the complexity level of the project.

We in Renga Software have got big plans for the future. In Renga Architecture we'll keep on enhancing complex forms: canted walls, complex roofs, feature for setting any section shape to any object. 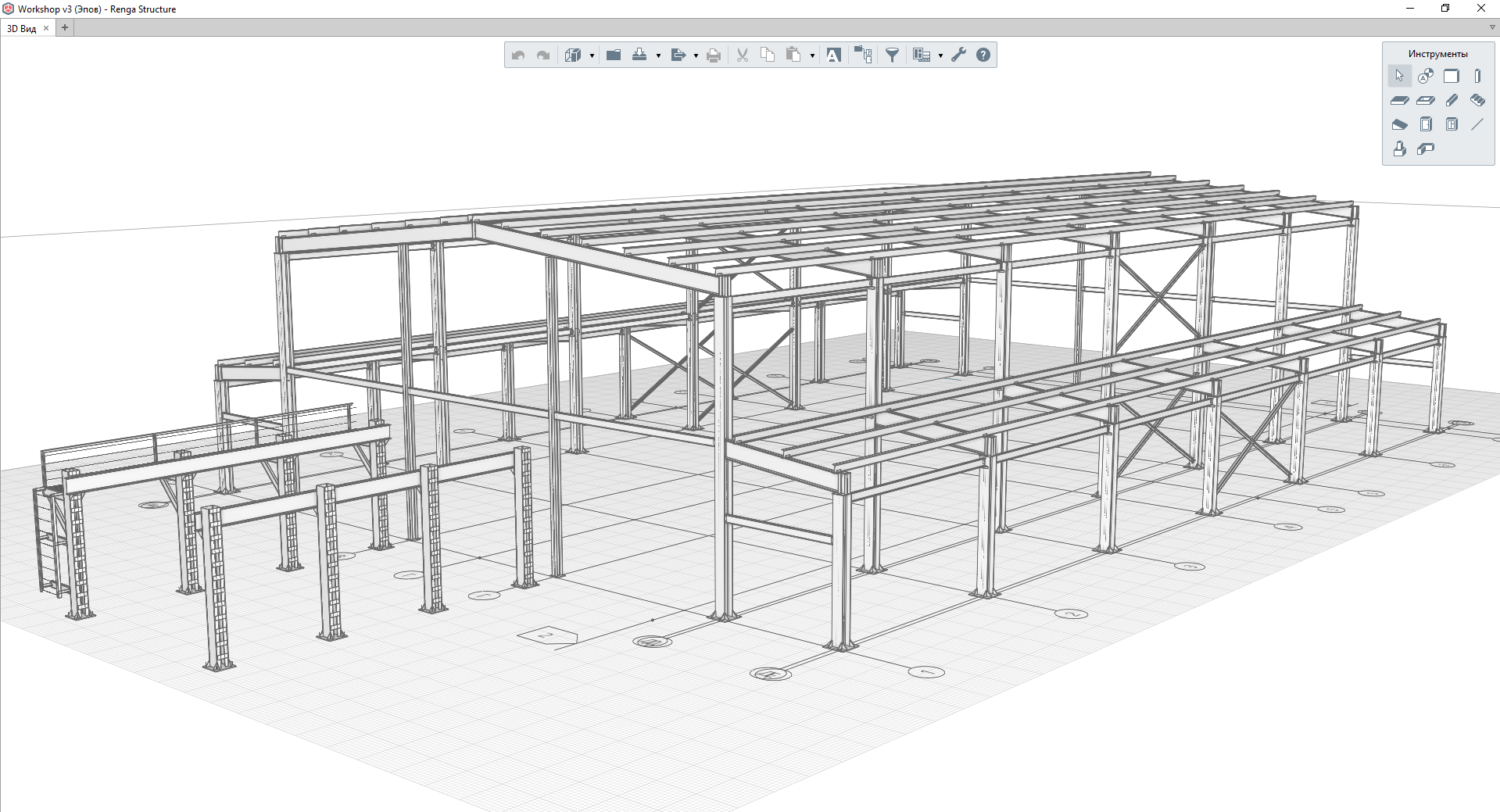 Our BIM system Renga MEP is going to be released in the fall of 2018. We continue working on our API, to provide outside developers with the opportunity to work in our IT environment. We also plan to improve integration between Renga and 1C cost estimating software solutions, transfer design data to the software systems LIRA and SCAD bypassing IFC format.

Download our full trial version of Renga Architecture and Renga Structure right now at our web site and experience all features and functionality that enable you to work more productively and focus on the design.