Federal Center for Codification in Construction was established in 1996 by the Ministry of Construction Industry, Housing and Utilities Sector of the Russian Federation. Federal Center conducts scientific research and development, provides guidance and education pertaining to design and construction, and assists in adopting new building technologies, including the Building Information Modeling.

In July 2018 President Putin instructed the Government to facilitate BIM technology implementation to the construction industry in the span of the year, and called on the IT companies to use domestically developed software. Federal Center for Codification in Construction was assigned with a task to perform state expert examination using only BIM model created in Russian-made software.

Achieving this will help stakeholders:

-          figure out how to perform the state expert examination of the BIM model;

-          assess and measure competitiveness of the Russian-made BIM software.

To complete all these tasks and implement a pilot project, Federal Center for Codification in Construction assembled a working group, including Main Department of State Expertise, Moscow State Expertise and engineering software developers Neolant, CSoft and Renga Software.

To evaluate the Building Information Modeling technology and test all its features, it was decided to implement pilot project of the general education school for 1000 students. A question is whether it is possible to perform state expert examination using only BIM model without any project documentation. 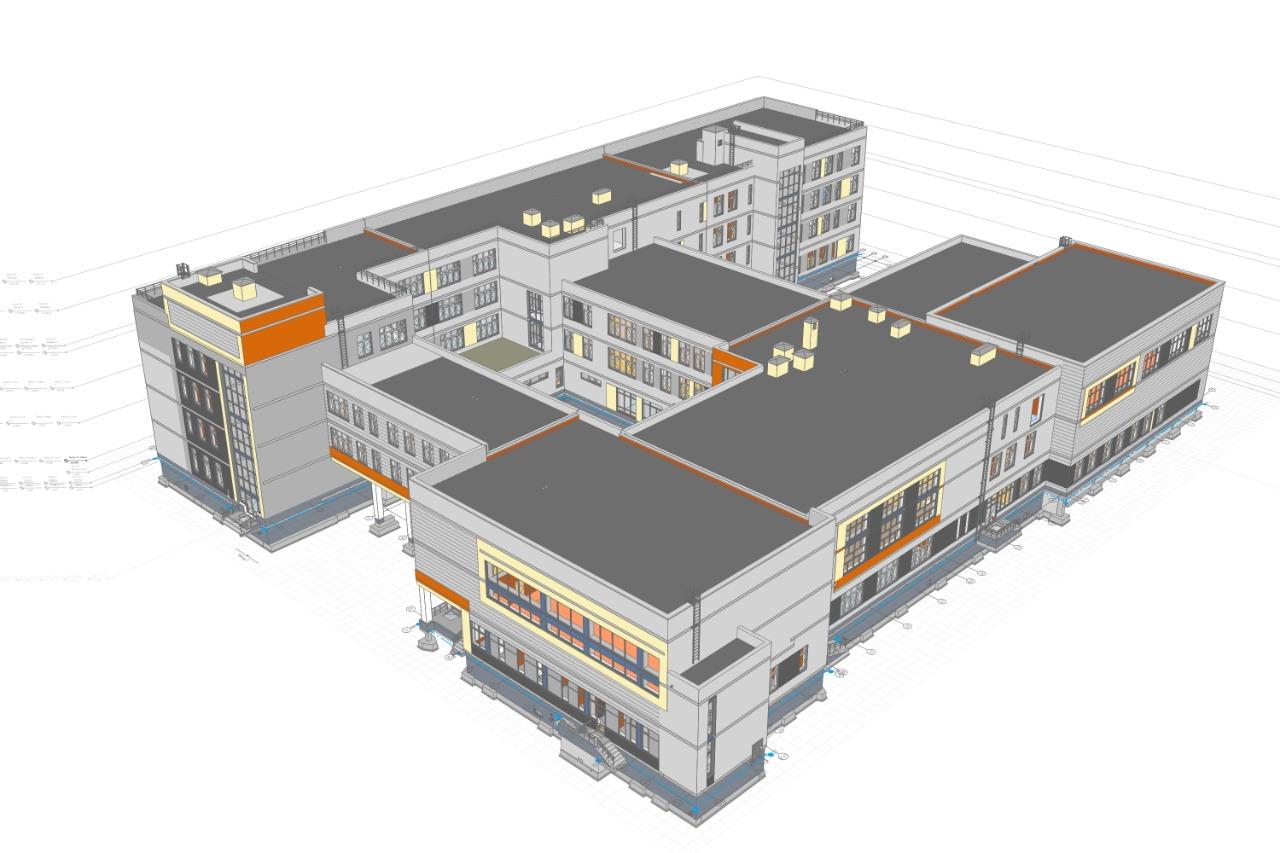 The architect was the first to work on the project. He was provided with project documentation and the BIM model created in Revit BIM software. It was initially planned to use Revit model as the foundation for further school design since Renga successfully interacts with other CAD systems including Revit. But reconciliation with the design documents showed that Revit model lacked some crucial updates made after performing state expert examination. This is why it was decided to create the BIM model from scratch using only Renga BIM system tools. Revit model still came in rather handy for the project team. Designers used the model to refine reinforced concrete structures.

Modeling in Renga started with the architect drawing grid lines. Then the designer joined the project. At that point in time Renga developers hadn't yet implemented the feature for worksharing. For this reason the architects and designers designed their models separately. They developed architectural and structural models alongside, starting with the structural framing and foundation, block by block. Then experts copied finished blocks into the separate file, assembling them into the single model. Once the structural framing had been assembled (fig. 2), the structural engineer started detailing it. 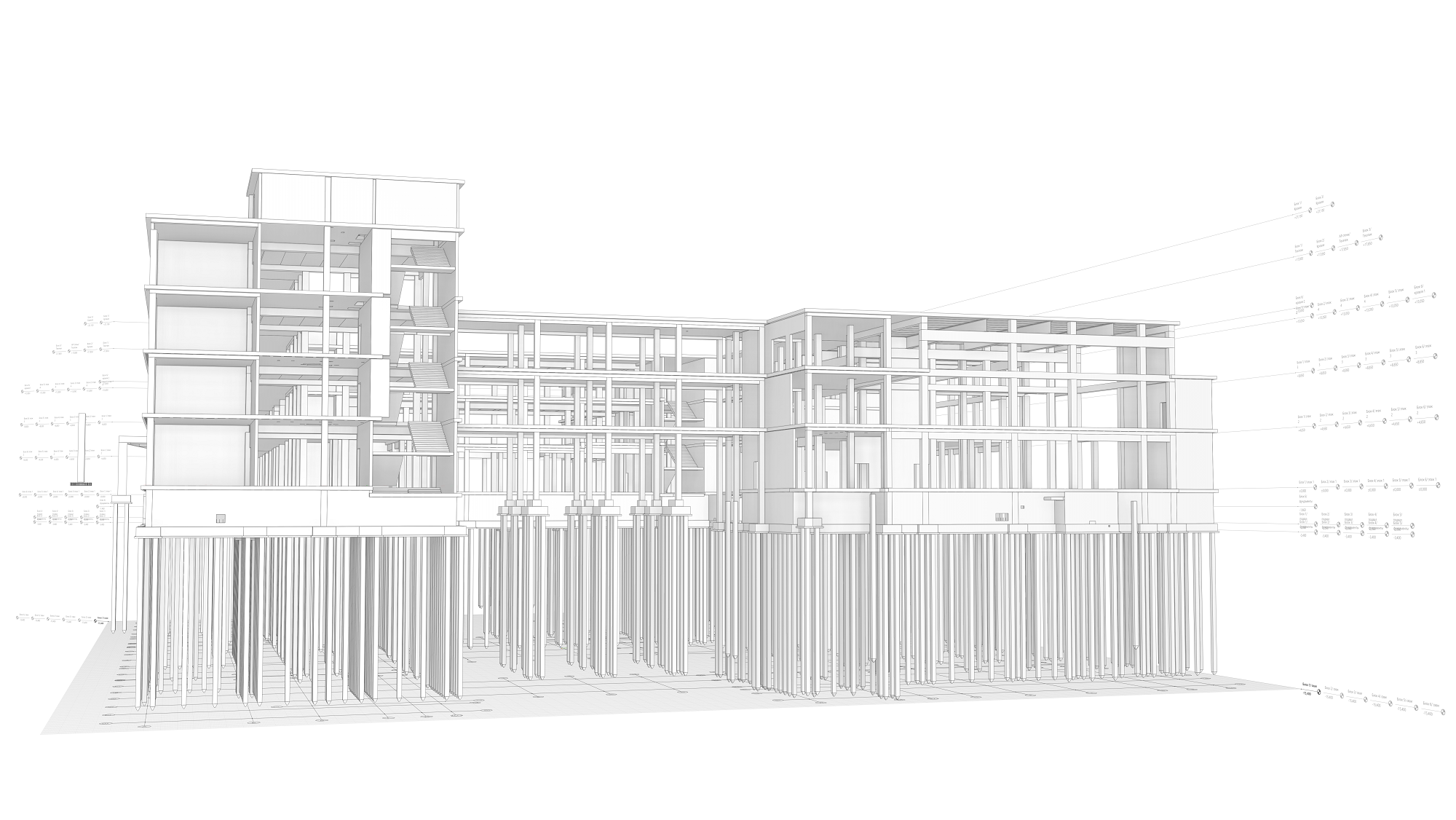 Detailing of structural design started with foundations and pile caps. Revit model with reinforced pile caps was used as the basis. To create pile caps in Renga, designers first assembled rigid frames and floors that were imported from Revit via open file format IFC. Renga software converted all the rebars into perfectly readable parametric Renga rebars (fig. 3). It is worth to mention that rebars could have been created from scratch in Renga software. But designers decided to use Revit elements in order to save time for project team and test software interaction via IFC format. 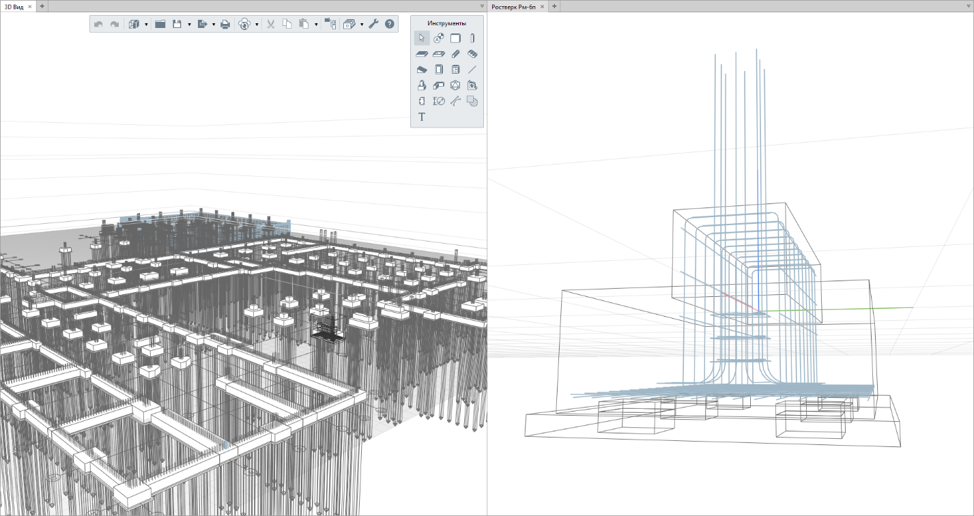 Floor slabs contained numerous holes that required reinforcement. Apart from that, each structure had the reinforcement zone. This task required combination of automatic styles and manual reinforcement. Reinforcement units and wireframes were assembled to facilitate and streamline design process. The assemblies allowed for reinforcement and later were placed in structures in accordance with the design requirements. 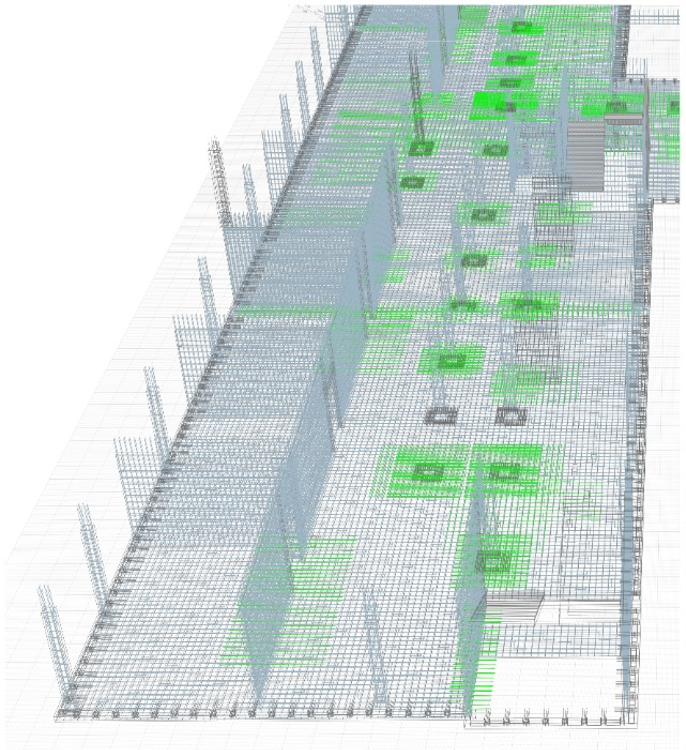 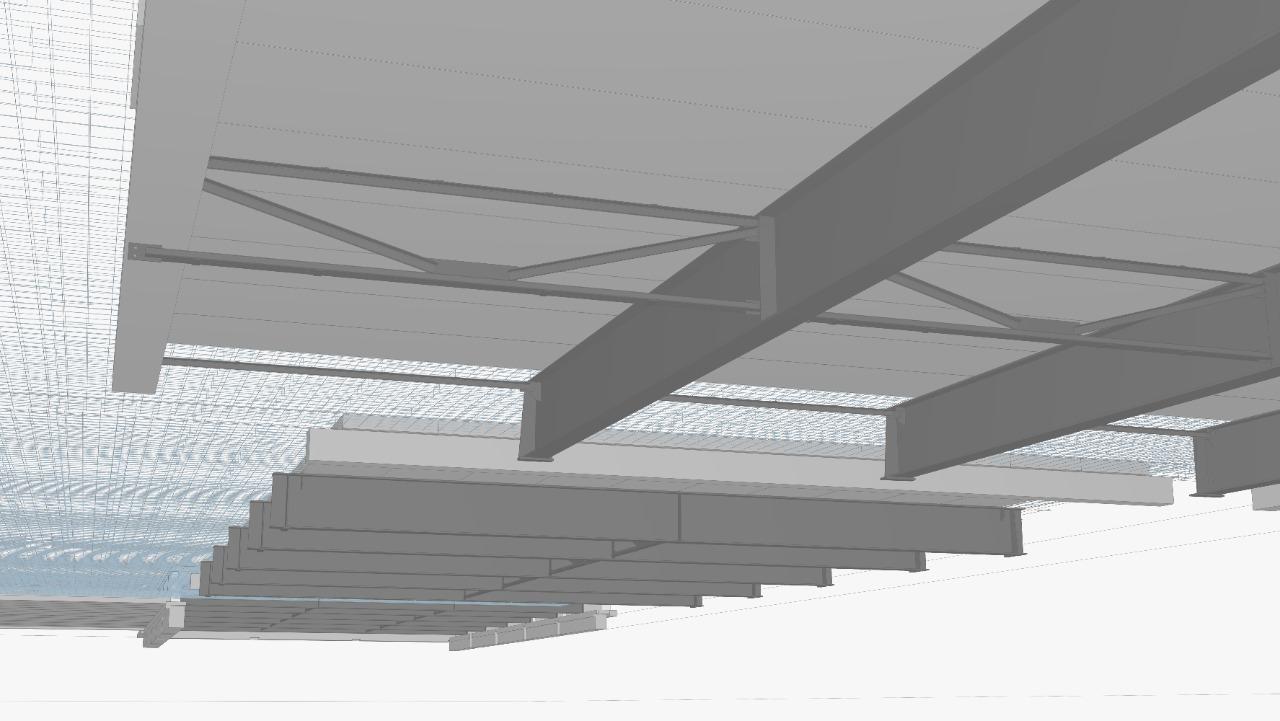 Meanwhile architect was populating the model with walls and partitions in order to transfer the model further to the MEP engineers. The model was a varied-height building of six blocks provided with the contraction joints. South wing represents three four-storied blocks housing elementary and secondary schools. South wing is connected to north wing, a three-story block housing a canteen, assembly hall, sports halls and multimedia library (fig. 6). 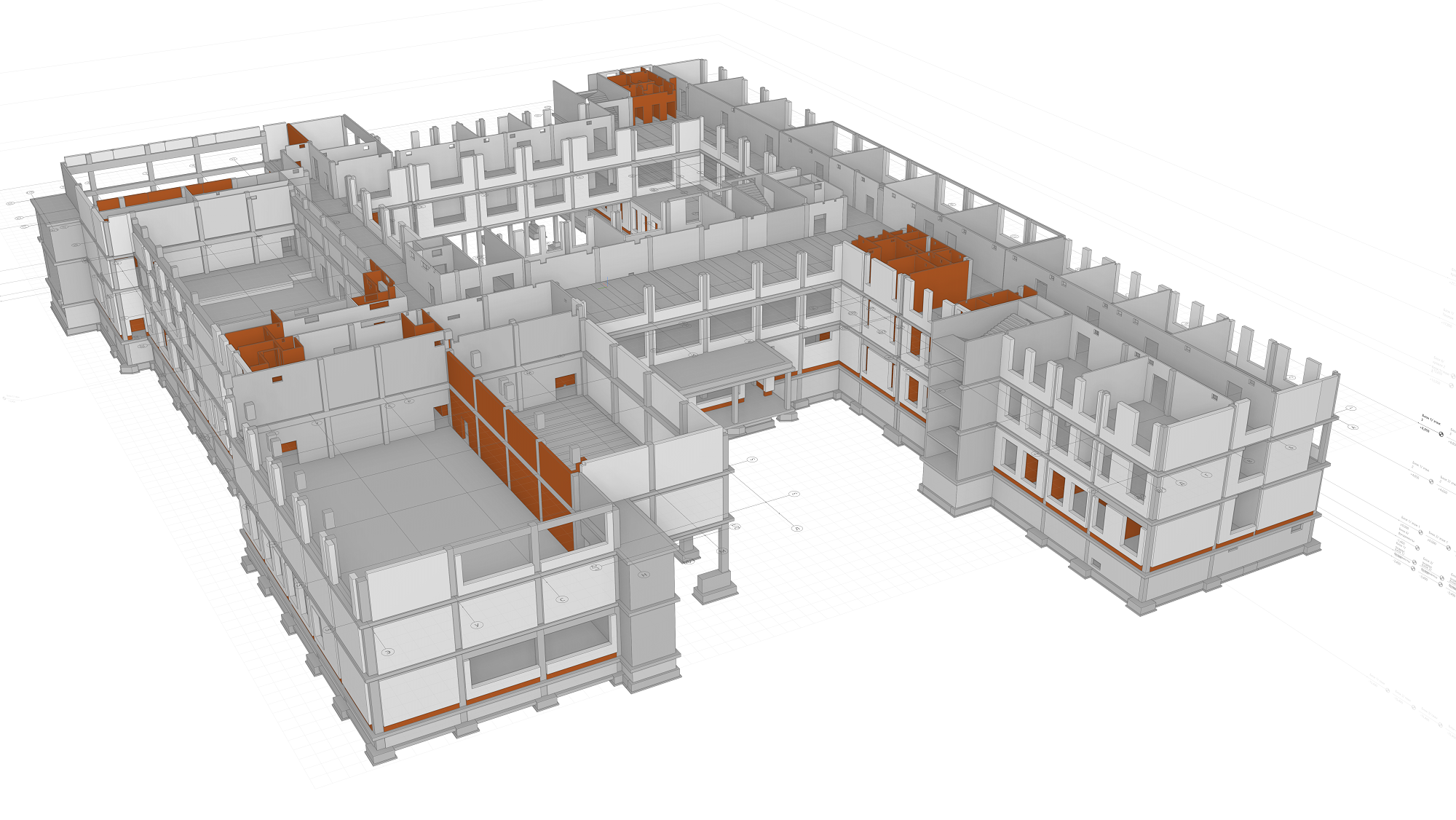 Architects kept on working on the project and populated the school model with the essential architectural elements (windows, doors, floors, elevations, roof, and rooms). Architects used helpful Floor and Wall tools to model compound structures of floors, elevations and roof. The project itself numbered about 50 types of floors and 30 types of elevations with various types of covering. Structure parameters may vary, but that is not an issue for Renga software because Renga styles are adaptive. For example, elevations and floors with the same set of layers, but different thickness can be applied with just one style. This style automatically changes base layer thickness depending on structure thickness. Same happened to the windows and doors design. A vast number of the different-sized doors and windows had been specified with the same style. Although digital terrain model was created in different software, ground plane was still designated in the model using the Model Line and Model Text tools (fig. 7). Thanks to these tools, exit way and back steps were also easily placed on the ground plane. 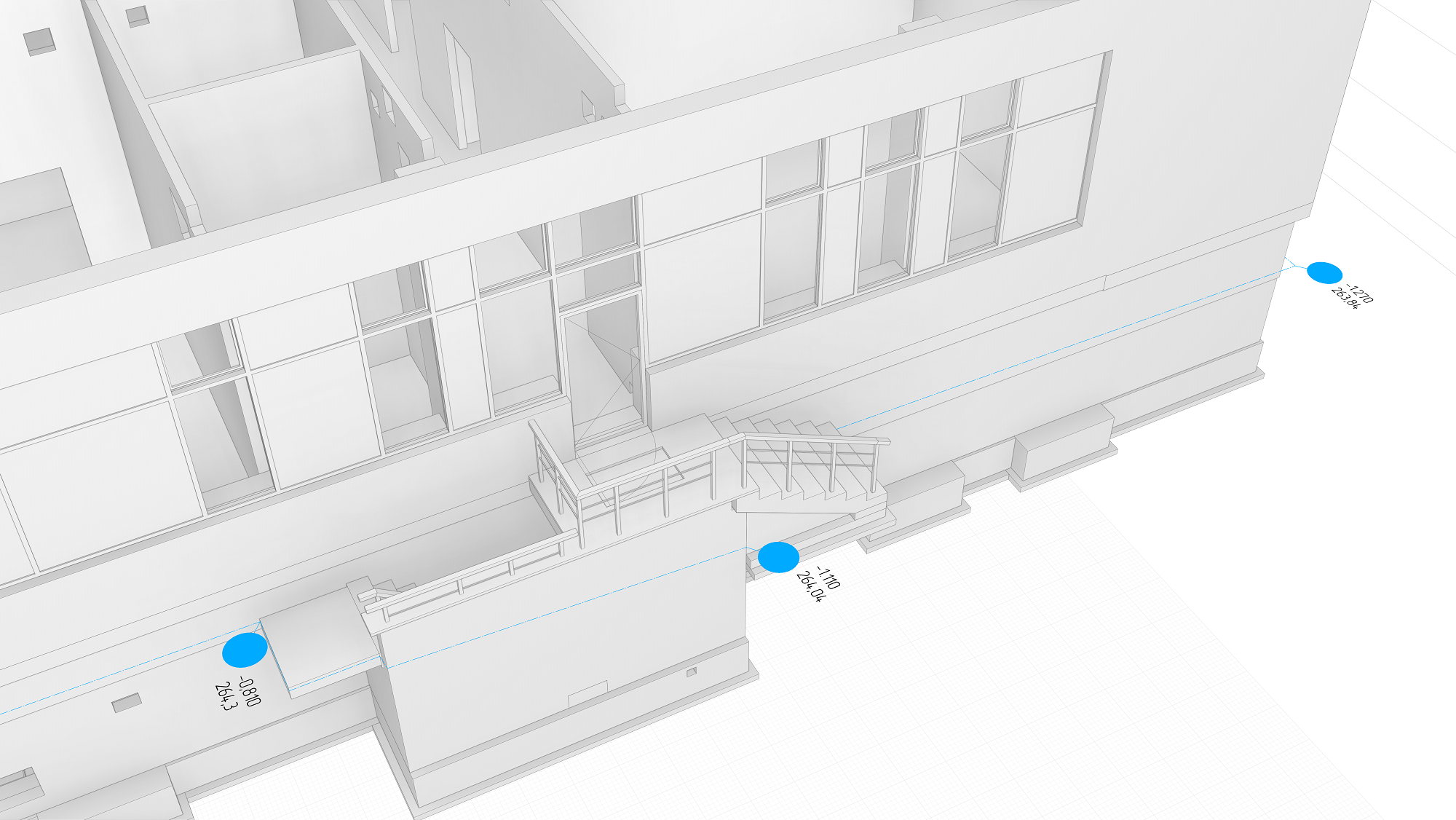 Information modeling, i.e. populating the model with attribute data, had started right after 3D model was created. BIM model should have been created in full compliance with Moscow State Expertise requirements. The Requirements prescribe the model to be in IFC format and have a set of custom properties. The required properties were immediately added to the Renga school model. Next step was to assign properties with the required values. Apart from geometric parameters, each object had to be assigned with custom properties and codes from the Moscow Construction Classifier (MSSK 4.0). Renga helpful and handy tool set managed to make this time-consuming process much simpler. Schedule tool allowed for the objects with similar parameters to be selected, and schedules with required properties to be generated (fig. 8). Then schedules were grouped by the general criteria. Using option Highlight in Model, designers set value for each object's property in BIM model (fig. 9). 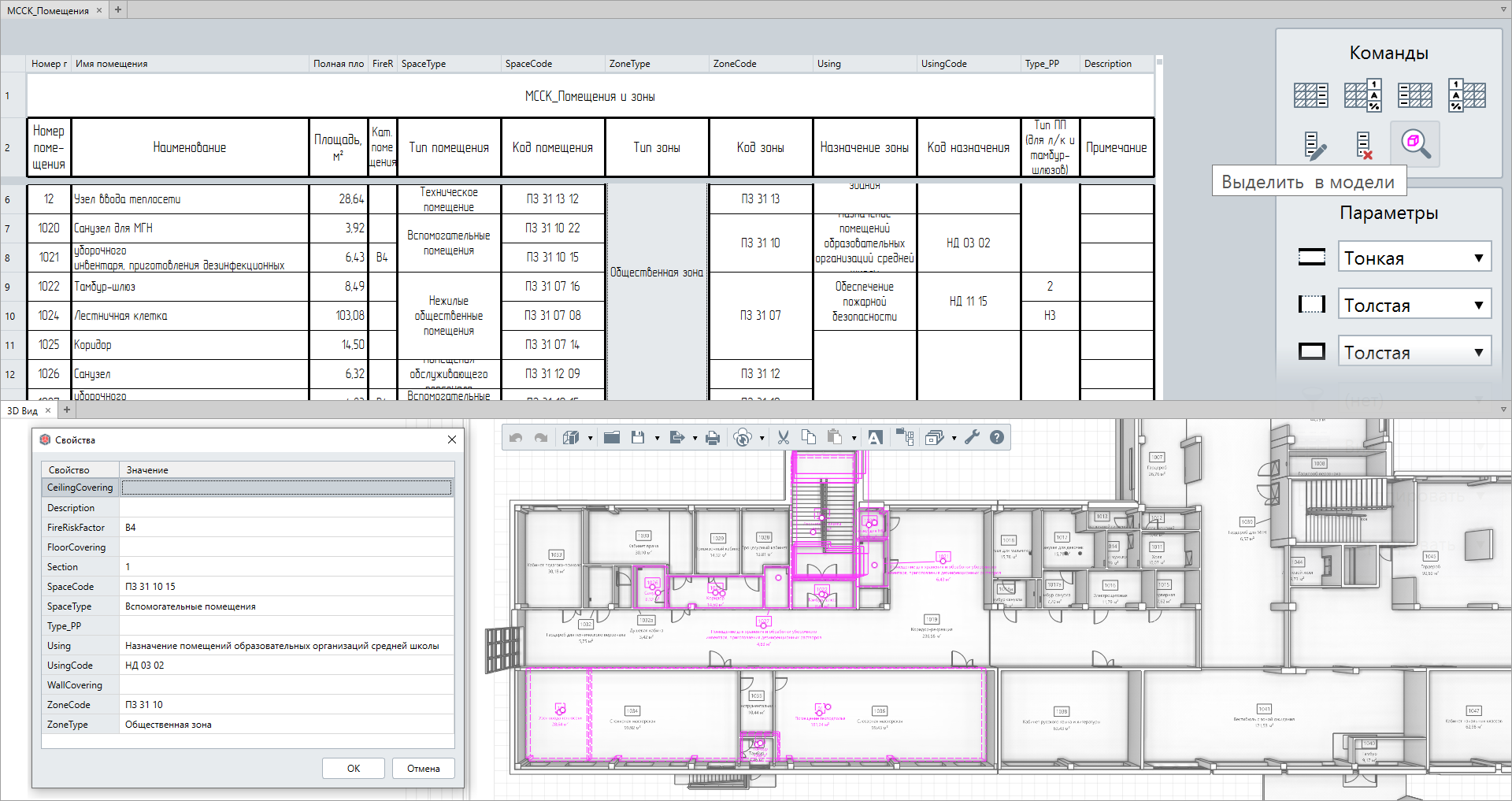 Figure 9. Working with the object properties in schedule

Once they received school model from the architect, designers started modeling MEP system. The first encounter with the school building project showed how challenging and labor intensive creating mechanical, electrical, and piping systems could be. Designing lengthy routes with large number of elements might have become a potentially problematic task. Especially when interconnecting networks with other objects. 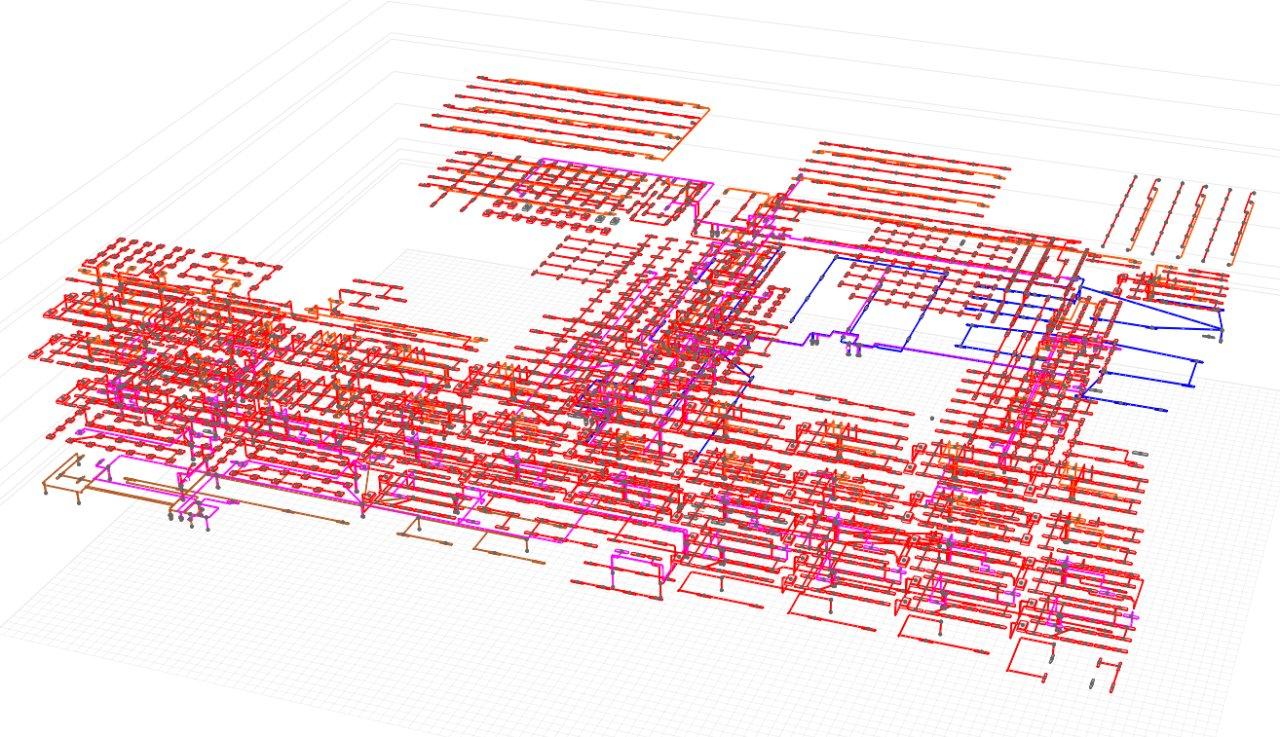 It took a month for considerably small project team of 8 people to create complete, consistent and precise MEP model.

When it came to enabling clash detection in MEP model, engineers prioritized each MEP system layout. Ventilation and sanitary systems were interconnected in the first instance. The rest of pipes and electric lines avoided them where entities intersected. The last step was to define holes for utility systems. The architect successfully performed this task in MEP model using the Window tool (fig. 13). To complete the project, the architect imported .SAT format furniture to the model (fig. 14). 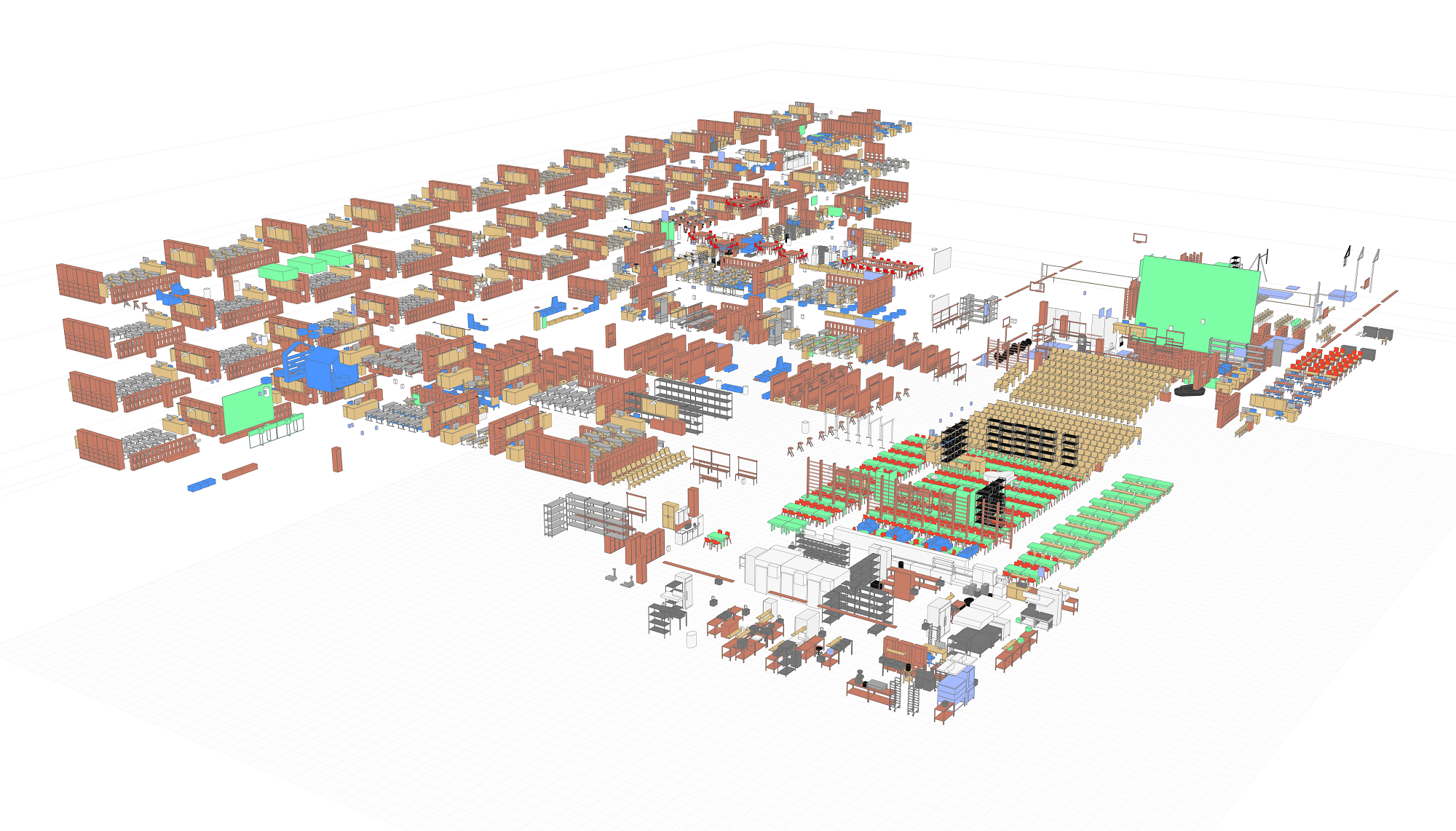 The school project design in Renga helped to unveil and amend errors introduced during the 2D design process.

This experiment gives a boost to establishing of BIM regulatory frameworks and contributes to development and adoption of Building Information Modeling technology.

The project showed Renga BIM system to be the multidisciplinary software for higher-quality, coordinated designs. Construction professionals can use Renga to drive efficiency and accuracy across the project lifecycle, from conceptual design, visualization, and analysis to construction.